2). Intubation based on assessment

Part 1: Pre-Intubation Planning: The latest American Society of Anesthesia (ASA) guideline addresses five crucial questions (below)(1) for initial assessment of airway. Answering these questions will allow the anesthetist to make the most appropriate subsequent decisions, such as whether to employ an awake or post-induction airway strategy or what type of laryngoscope to use.

Difficult laryngoscopy is defined by the ASA as the inability to visualize a portion of the vocal cords after multiple laryngoscopy attempts by a trained anesthesiologist. Listed below are some of the clinical cues that might predict difficult intubation (2).

Supraglottic airway: Many predictors of a challenging supraglottic airway overlap with that of a challenging face mask, including male gender, obesity (BMI > 30), tonsillar hypertrophy, and cervical spine pathology. Other factors, most of which present as physical barriers to a laryngeal mask airway placement, include poor dentition or large incisors, neck radiation history, reduced mouth opening, and hypopharyngeal and subglottic masses or other pathology (7).

Protection of the airway must be ensured especially in patients with high risk of aspiration during induction of anesthesia to avoid complications of aspiration. Factors that increase risk of aspiration include but are not limited to a full stomach, history of symptomatic GERD, conditions that increased intra-abdominal pressure such as pregnancy or ascites, gastroparesis, hiatal hernia, and gastric outlet obstruction.

During the period during act of intubation, no oxygen is delivered to the patient under anesthesia. Thus, it is crucial to gain a sense of how much time a patient will have before they start to desaturate, and when hypoxemia will start to become an issue. The time to desaturation is directly influenced by 3 main factors:

Examples include tracheostomy and cricoidotomy. Barriers to these airway strategies included previous hx of neck radiation and anatomical pathologies.

Awake intubation should be considered when there is a need to preserve spontaneous ventilation and airway reflexes. This is crucial in situations with difficult laryngoscopy, difficult face mask or supraglottic ventilation, increased risk of aspiration, or quick time to desaturation, as described below.

Difficult face mask or supraglottic airway ventilation: these are the safety measures for ventilation and oxygen delivery in the case of intubation failure. If these backup measures are not feasible, it follows that the patient should be awake and able to generate their own breaths to avoid hypoxia or need for a surgical/emergent airway.

Significant risk of aspiration: Non-fasted patients, pregnant patients, obstructed (GI) patients all shared an increased risk for aspiration of gastric and other content into the lung. The post-induction patient is at greater risk of complications because general anesthesia completely obliterates the cough and gag reflex, both of which are important mechanism of protecting the airway.

Short time to desaturation: The brief period of apnea during intubation can result in imaginable complications and ultimately even death because oxygen is no longer delivered to the body. How well the patient tolerates apneic episode depends partially on how much time the patient has before oxygen supply starts running low; this is reflected by decreased oxygen saturation. A patient who has very little respiratory reserve will desaturate much quicker than a patient with a much larger respiratory reserve. This means that during an equal length-period of apnea, the patient with the shorter time to desaturation will a longer period of oxygen deprivation. Thus, in a patient with poor respiratory reserve, awake intubation should be considered to reduce the complications of apnea.

Method: Awake intubation is most commonly performed with a flexible scope intubation, which allows for better navigation in airway of an awake patient. Other methods include video laryngoscopy, direct laryngoscopy, and retrograde wire-aided intubation. Pain control is achieved airway topicalization, most commonly lidocaine. Sedation, commonly midazolam, is also provided for anxiolysis and retrograde amnesia8. If initial awake intubation fails, the alternative awake techniques mentioned above and alternative anesthetic techniques may be considered. It is important to optimize oxygenation (via nasal cannula, head elevation, NIV during preoxygenation) whenever possible. Alternatively, the case may be aborted per physician judgement. If the case is emergent, induction of anesthesia for intubation or emergency invasive airway may be considered.

The difficult airway algorithm provides a reliable plan of action for post-induction intubation. A metanalysis of 38 difficult airway algorithms identified in 88 papers revealed that most (97%) included stepwise approach to airway management, which all employed techniques including tracheal intubation, face-mask ventilation (FMV) and supraglottic airway (SGA)4. A majority of these followed a similar specific order of airway techniques (first intubation, then FMV or SGA, then emergency surgical airway). However, some allows a greater degree of flexibility based on circumstance and clinician judgement. For example, the ANZCA (Australia and New Zealand College of Anesthetists) allows intubation, FMV, and SGA in any order based on clinical scenario. To simplify this, we will focus on the algorithm established by the 2022 ASA guidelines(1). 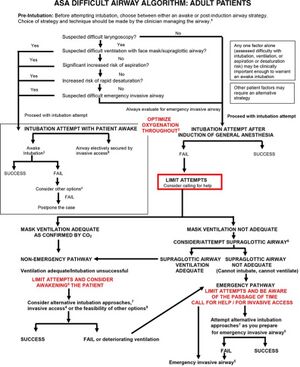 The 2022 ASA guideline for post-induction difficult airway management begins with a straightforward attempt at intubation with a planned blade (Macintosh, miller, or cMAC). If this initial attempt fails, there are a few key things to keep in mind: 1). Consider calling for backup support and 2). limit the number of attempts at intubation as each attempt increases risk of trauma, airway edema, larygo- or broncho-spasms. To optimize the success of the second attempt at intubation, it is necessary to first ventilate the patient to replenish the oxygen reserve. Ventilation is most often performed with a face mask (FMV), with or without the aid of an oral airway. If FMV fails, a supraglottic airway device should be used to attempt ventilation. The success of ventilation, which is confirmed by detection of end tidal CO2, determines whether the emergent or the non-emergent path is pursued.

1. Non-emergency pathway: The non-emergency pathway is taken after initial intubation has failed, but face mask or SGA ventilation attempt is successful. At this point, it is not unreasonable to consider awakening the patient and postponing the case or intubation while ventilation is adequate. Before attempting intubation again, the anesthetist should optimize airway management success by considering other intubation approaches (i.e. video-assisted laryngoscopy, different laryngoscope blade), use of adjuncts (tracheal tube introducers, stylets, tube change, external laryngeal manipulation), and the feasibility of proceeding on with the procedure on only face mask or SGA ventilation. Once the plan has been optimized, reintubation can be attempted again. The number of intubation attempts should be limited as each attempt has the potential to cause airway trauma, swelling, and other complications. Ultimately, the number of intubation attempts is limited by the ability to successfully ventilate after each intubation attempt. In the case that ventilation is no longer adequate, the emergency pathway would be the next course of action.

2. Emergency pathway: The emergency pathway is taken when initial intubation has failed and ventilation with face mask and SGA are unsuccessful. In this case, immediately call for help. The patient is no longer ventilated, and it is only a matter of time before patient’s oxygen reserve is completely depleted. Preparation for invasive access (surgical cricothyrotomy, needle cricothyrotomy with pressure regulated device, large bore cannular cricothyrotomy, or surgical tracheostomy) should be begun as well. In the meantime, continue to attempt intubation with further optimization as mentioned in the non-emergency pathway. Once again, it is crucial to be cognizant of the time that has elapsed. Limit the attempts to intubation and move on to emergency invasive airway as quickly as possible.}

Retrieved from "https://wikianesthesia.org/w/index.php?title=Difficult_airway_algorithm&oldid=13855"
This page was last edited on 29 August 2022, at 09:51.
This page has been accessed 60 times.